Elizabethan stages did not use scenery. Acknowledging the difficulty of conveying great battles and shifts of location on a bare stage, the Chorus (a single actor) calls for a “Muse of fire” so that the actor playing King Henry can “[a]ssume the port [bearing] of Mars”. He asks, “Can this cockpit [i.e. the theatre] hold / The vasty fields of France?” and encourages the audience to use their “imaginary forces” (imaginations) to overcome the stage’s limitations: “Piece out our imperfections with your thoughts.”

The early scenes deal with the embarkation of Henry’s fleet for France, and include a real-life incident in which the Earl of Cambridge and two others plotted to assassinate Henry at Southampton. (Henry’s clever uncovering of the plot and his ruthless treatment of the plotters show that he has changed from the earlier plays in which he appeared.)

When the Chorus reappears, he describes the country’s dedication to the war effort – “They sell the pasture now to buy the horse.” The chorus tells the audience “We’ll not offend one stomach with our play”, a humorous reference to the fact that the scene of the play crosses the English Channel.

The Chorus appears again, seeking support for the English navy: “Grapple your minds to sternage of this navy” he says, and notes that “the ambassador from the French comes back / Tells Harry that the king doth offer him / Katharine his daughter.”

At the siege of Harfleur, Henry utters one of Shakespeare’s best-known speeches, beginning “Once more unto the breach, dear friends…”

Before the Battle of Agincourt, victory looks uncertain, and the young king’s heroic character emerges in his decision to wander around the English camp at night, in disguise, so as to comfort his soldiers and determine what they really think of him. He agonizes about the moral burden of being king, noting that a king is only a man. Before the battle, Henry rallies his troops with the famous St Crispin’s Day Speech (Act IV Scene iii 18-67), referring to “we few, we happy few, we band of brothers”.
Katharine learns English from her gentlewoman Alice in an 1888 lithograph by Laura Alma-Tadema. Act III, Scene iv.

Following the victory at Agincourt, Henry attempts to woo the French princess, Catherine of Valois. This is difficult because neither speaks the other’s language well, but the humour of their mistakes actually helps achieve his aim. The action ends with the French king adopting Henry as his heir to the French throne and the prayer of the French queen “that English may as French, French Englishmen, receive each other, God speak this Amen.”

But before the curtain descends, the Chorus re-appears once more and ruefully notes, of Henry’s own heir’s “state, so many had the managing, that they lost France, and made his England bleed, which oft our stage hath shown” – a reminder of the tumultuous reign of Henry VI of England, which Shakespeare had previously brought to the stage in a trilogy of plays: Henry VI Part 1, Henry VI Part 2 and Henry VI Part 3.
The 1587 edition of Holinshed’s Chronicles

As with all of Shakespeare’s serious plays, there are also a number of minor comic characters whose activities contrast with and sometimes comment on the main plot. In this case, they are mostly common soldiers in Henry’s army, and they include Pistol, Nym, and Bardolph from the Henry IV plays. The army also includes a Scot, an Irishman, an Englishman and Fluellen, a comically stereotyped Welsh soldier, whose name is an attempt at a phonetic rendition of “Llywelyn”. The play also deals briefly with the death of Falstaff, Henry’s estranged friend from the Henry IV plays, whom Henry had rejected at the end of Henry IV, Part 2. 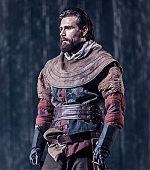 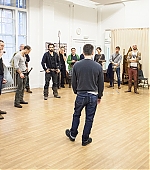 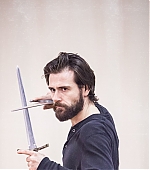 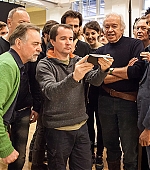